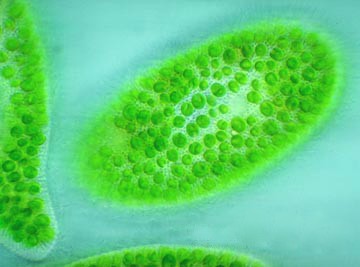 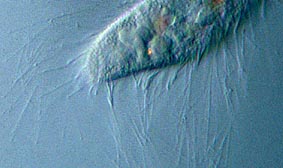 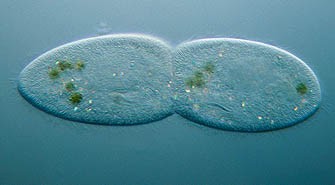 Although the kingdom Protists is no more recognised as a real systematic category, the term, written with a small “p” ,   may be still useful to indicate in general eukaryotic unicellular organisms to which this post is dedicated.

Protists have only one cell and this unique cell not only performs all vital functions typical of eukaryotic cells but also realize and recognize the external stimuli coming from the environment and from every other organism they may contact.  Then, the cell has to work out a suited answer, to get the required energy and finally to reproduce. ……to say the least!!!
As an example I will, thereafter, illustrate what Paramecium, the most famous ciliate protist, often reported even on primary school books, is able to do.

1)   Paramecium is able to move thank to its cilia. Cilia are slender protuberances that project from the cell body. These organelles “invented” by Ciliates, to which Paramecium belongs, are anyway present in many cells of our body with the same structure but used for different purposes. Cilia beat the water like little flexible paddles. Their beating is variable in frenquency and direction. Thus the ciliate is able to vary the speed of its motion and to reverse its motion once an obstacle is present.

2)  Like all ciliate protists, Paramecium is an heterotrophic organism,    requiring organic compounds for its principal source of food. In other words like animals  Paramecium eats. “But a mouth is needed to eat”, you will say, well Paramecium has a  mouth!!!
It is called cytostome ( i.e. cellular mouth) and is localized at the end of a funnel shaped   depression of the surface all covered by cilia. Obviously the mouth is not completely open, otherwise cytoplasm would go out, it simply  is a little zone delimited by the plasmamembrane (the typical membrane by which every cell is covered) alone while additional membranes are present on the rest of the cell surface.
When the food, forced by the ciliary beating, reaches the cystostome the membrane blows up like a balloon toward the interior, gathering food and water. When the balloon is swollen enough, it detaches and begin to move in the cytoplasm. There it is reached by small vesicles containing digestive enzymes and is called “food vacuole”.
The food inside the vacuole is then digested and assimilated. Waste will be then eliminated through another specialized superficial zone called “Cytopige” i.e. cellular anus.
So Paramecium possess a complete digestive apparatus, comprising mouth and anus, that can be formed every time is needed!!
Noticeably the membranes of disrupted vacuoles are then recycled to form the new ones.

A n excretory apparatus, consisting in the contractile vacuole system, is even present to eliminate excess water and salt.

3) What does Paramecium eats?  Bacteria and autotrophic protists often called microalgae. It can be considered in some way “erbivorous”.
Most Paramecium species live in fresh water, a very variable habitat in which the food amount may be at times scarce.  To avoid starvation, a number of species are able to preserve the food: some food vacuoles are not reached by digestive enzymes and the microalgae they contain remain alive. They can also reproduce since their host will provide to keep them exposed to the light to allow photosynthesis. Then, when the environmental food is lacking, our provident protozoon can digest the algae it grew up or, simply, utilize their photosynthetic products. In a certain way these Paramecia become authotrophs.


4)  As erbivorous animals Paramecium is a potential victim of carnivorous predators (many ciliates are predators).  Many of these predator ciliates  attack and immobilize the pray ( whose presence they detect trough membrane receptors) by a sort of toxic “arrows” (toxicysts) and easily ingest the victim. And the victim is not able to escape? Yes, toxicysts discharge appear to evoke trichocyst discharge in Paramecium. Trichocysts are Paramecium defensive weapons: they are not toxic but their explosive extrusion causes a rapid backward movement by which the victim may escape predation.

Toxycists and trichocysts are two different types  extrusomes, cell organelles present only in protists. Different types of extrusomes exist but all of them can be extruded without damaging the cell.

5)  Once the energy accumulated by feeding is enough, Paramecium reproduces. Like all Ciliates, Paramecium has a dual nuclear apparatus, consisting of a  macronucleus in which genes are present in many copies (polyploid)   and one or more diploid micronuclei. The macronucleus controls non-reproductive cell functions, expressing the genes needed for daily functioning. The micronucleus is the generative  nucleus, containing the genetic material that is passed along from one generation to the next.
Paramecia reproduce asexually, by binary fission. During reproduction, the macronucleus splits simply while the micronuclei undergo mitosis. The cell divides transversally after the replication of all cellular structures. In this way each new cell obtains a copy of the micronucleus and the macronucleus and is ready to live autonomously.

We do not know exactly in which situation the “thing” called “conjugation” happens in the natural environment. In the laboratory it is generally induced by a light starvation. Conjugation is only realized between conspecific individuals but not all whit all !!! The two conjugants are of different mating types, in other words of different sex.
We are not able to distinguish the different mating types but Paramecia are able to recognize each other, through membrane receptors. The recognition  induces a typical preconjugant behavior, that expert protozoologists can easily identify, and finally pair formation. The two conjugants remain attached by the cytostomial zone where a cytoplasmic bridge takes shape. During the process the old macronucleus disintegrates and the micronucleus of the cells undergo meiosis.

Thus micronucleus is able to perform mitosis and meiosis.

Then one of the aploid nuclei derived by meiosis pass trough the cytoplasmic bridge in the other partner and fuse with an aploid nucleus there stayed on.  At the end each conjugant has a new diploid nucleus, different from the nucleus they had before. The new macronucleus is formed by replication of the new diploid nucleus.Then the  two individuals separate. They were two at the beginning of the process and are still two at the end. Thus conjugation cannot be considered a kind of reproduction: it is however a sexual phenomenon causing genetic mixing to increase the species variability